How to identify Bad caps in your electronic equipment

Identifying a bad capacitor or swollen capacitors is not that hard. Cheap capacitors cannot stand the heat – either the temperature inside the unit or the heat coming from the current running through them.

If the capacitor voltage is too low for the current running in the curcuit or they simply are cheap (chinese) caps you will most likely see something like this: 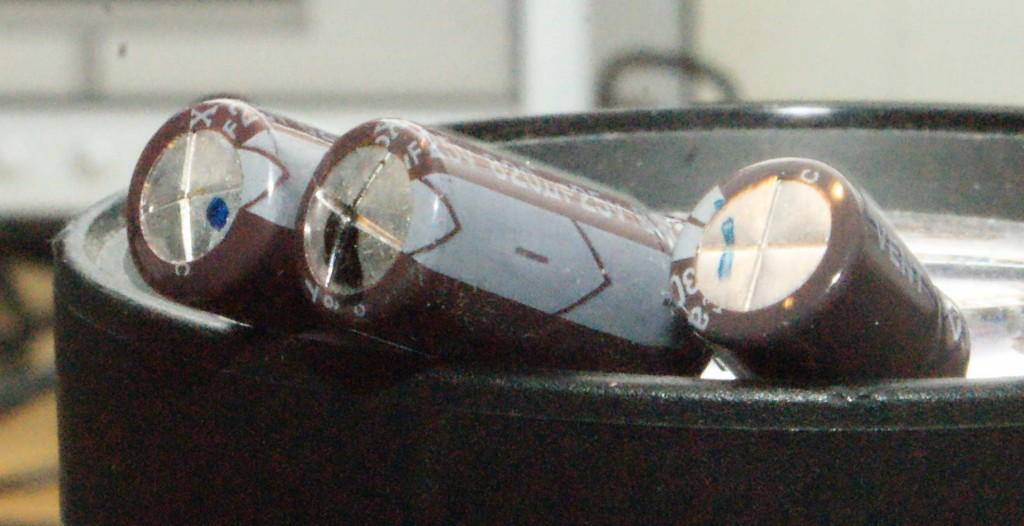 This is a swollen capacitor  – infact to bad caps and one good cap.

Bad caps are every where in electronic equipment. They make sure monitors doesn’t live too long.

The two capacitors on the left are swelling on the top. Compare this to the capacitor on the right which is totally flat. These capacitors are not leaking yet. A few months more and they would puke all over the circuit board causing damage to other components.

A bad capacitor that is not removed will eventually leak brown fluid and some times they get so deformed that they won’t stand upright anymore.

When you replace bad caps teke a note (or a photo). Electrolytic capacitors are polarized – that means one leg is positive and the other is negative. Look at the cap in the middle of the image. There is a grey bar from top to bottom with a minus sign (before the angle).  The new capacitor has the same grey bar which must be placed in the same direction as the old! Otherwise you will see an explosion!

If the voltage on the bad cap says 25v you might replace it with one that says 35v or if the temperature on the cap says 80 degrees you might also find a new that says 100 degrees. But where it says 820uF you buy another that also says 820uF! Unless you know what you are doing !!!